Athens was modernised and spruced up for the 2004 Olympic games and is really quite smart these days, and perhaps surprisingly, spotlessly clean. There is a bright and speedy train which transports its passengers, partially above and partially below ground, from ‘Venizelosto’ airport to various stations in the city. The escalator at ‘Plaka’ station lofts the passengers to street level and disgorges them onto the street at the foot of the acropolis hill. It was a bit of a bit of a culture shock for me, emerging into the daylight at Plaka station and raising my eyes to the massive street map next to  the exit, to find that all the names and instructions were only in Greek script. I knew the name of my B&B establishment and which street it was in but it wasn’t going to help if I couldn’t read the map. I stared blankly at the direction finder for a few moments but was then quite relieved to realize that I knew the cymbals from study days, and that when one replaced the cymbals with the Latin alphabet equivalents, the place-names started to make sense.There was Alpha (α) = a, Beta (β) = b, Omega (π) = z, Theta (φ)=t  along with the rest of the familiar gang, and the place names suddenly became understandable.

I met up with my friends and would-be yacht crewmates and we spent a few days exploring the tourist attractions of the ‘Monastariaki’ & ‘Plaka’ districts and selecting our eating places from a plethora of similar offerings. Here are a few pictures of what those areas looked like. 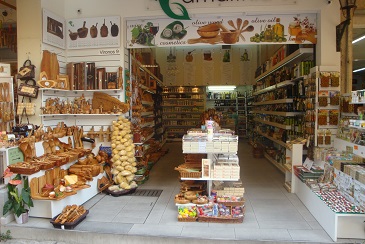 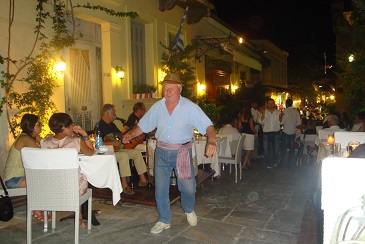 We also enjoyed the Acropolis and Acropolis museum and also various other ancient attractions.

Our crew of 6 friends arrived separately over the next few days and when we had all done sightseeing, it was time to board the yacht. So off we went to the marina at Kalamaki south of the big harbour of Piraeus. This was by far the biggest marina I had ever seen and is surely one of the largest in the world. There are about 2 000 walk-on mooring there and they are arranged as many fingers reaching out into the yacht harbor. The boats are all reversed into their parking places and tied up securely alongside each other until it is time for them to sail.

The boat was a Bavaria 40. She was a comfortable sloop and rigged strictly for charter. This meant that she had only two sails. They were a working type jib with self-furling gear and a battenless main which furled into the mast. She had an electric anchor windlass and a full automated navigation station with chart plotter etc. She was fitted with a massive Bimini and spray dodger which protected us from the sun but made it difficult to see the sails. The accommodation was good but we had fewer bunks than we had anticipated. We were supposed to be 7 people on the boat and there should have been sufficient bunking in the three cabins and the saloon. The problem was that the saloon only had one narrow berth in it and not the two we had expected. This could still have worked if there had been three couples but there were only two couples and three singles. We considered changing to a bigger boat but the cost was a lot more and we couldn’t stretch to that. One woman then decided to quit the boat. She was the last person to have been invited and she was anyway the veteran of a number of charters of this type, so she decided she would be happier doing her own thing. We were all sad to see her leave but she went off to the islands on her own and apparently had a great time. The face in this picture is that of

Constantine, the operator of the charter company. A great salesman and vibrant personality who was actually a dentist by training but preferred messing about in boats. I think he did pretty well out of it.

Although the charter was for one week, we effectively got only 6 sailing days because of hand-over procedures and times. We spent the first night on board in the marina at Athens. The agent took us through the boat and then we stowed all our gear, had a couple of night-caps up in the copious cockpit and settled down  for the night, filled with excitement for the morrow.

In my next blog post I’ll describe the sailing routes we took and our week on the Mediterranean sea.