So when I started to learn to play the bagpipes, the first thing I had to purchase was a practice chanter. The full set of bagpipes uses a hide or synthetic bag to provide a steady flow of air through the chanter and the drones. The drones are the three pipes that rest on the pipers shoulder and they just make different bass notes to support the chanter.

The chanter itself though is the pipe with finger holes in it that makes the notes of the tune. Here is a photo of yours truly taken by my bagpipe teacher when I went for a lesson with my new

pipes. There is a reed in the chanter that vibrates when a stream of air from the bag passes over and through it. But here’s the thing. A bagpipe chanter makes a heck of a loud sound (so,me would say noise), and so do the drones. If you practiced playing them in your apartment, some neighbour would sooner or later shoot you. So in modern times, the practice chanter was developed. It is similar to the actual chanter, but the reed is made of plastic and is relatively un-noisy. There is no bag so the air to sound the practice chanter is provided directly by the player blowing down a blow stick which is connected directly to the practice chanter.

So having set the scene, let’s get back to the title of this blog article, i.e. ‘Bamboos and boxes’.

Any musical instrument should be protected for transportation and since I had some bamboo lying around, I sawed off a length and used it to make a carrying case for my practice chanter. The cap and strap are made of leather. I thought it was quite arty looking and would be a convenient way of carrying the chanter around. Here is a picture of what I called ‘The Quiver’. It worked O.K. but it is quite a long and bulky object and I realised after a while that it was not very practical. So I made a container of a different design for the chanter. It is a little foam lined, hinged box with cutouts in the foam to cushion the chanter. 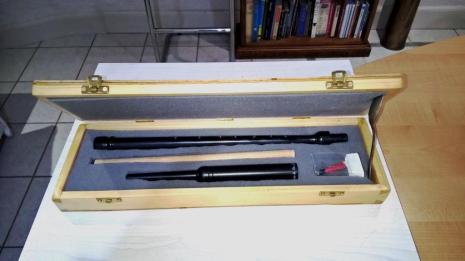 To transport the chanter in this box, one unplugs the blowstick from the lower part and stows them side by side. The reed has to be removed too because it would be too vulnerable if it was left protruding from the playing tube. The reed and also a couple of spare reeds get popped into a small plastic pill box with a desiccant to keep the reeds moisture free.