Imagine my chagrin when Micycle decided to go camping in the heart of bitter winter. But when Micycle gets a bee in her bonnet, there is simply no point in arguing. To make matters worse, this time it was not even Micycle’s idea but came from the mad pirate, Roger Page and his tandem. A fearsome combination.

Frightening. I did put my foot down in one regard though. I would tolerate the tent and all that stuff but I wanted it to be reasonably well equipped and I was not willing or able to carry all I wanted on my back. Roger came to the rescue and lent me his car trailer, so I launched out early on Saturday morning with a trailer load of wood and tents and cooler boxes and delivered them to the Koggelbaai campsite where I tied them to a tree before driving home again. When I got back to Kleinmond the bicycles were pushing at their pedals to get rolling so we all mounted and headed off cheerfully into the teeth of the North Westerly. At that stage it was just Roger and his fostered Grandson

Quinn on the tandem and Micycle under me.

It’s only a two hour ride to Koggelbaai but because we stopped at Rooi Els to have breakfast and to unintentionally feed sugar bowls to the Baboons, it took us nearly three. No problem though and by the time we three stalwarts had set up camp, the day was still a pup. The

sun was pouring out of a clear sky and the beach was pristine. The waves there roll in as long walls of water a couple of kilometers wide. All of a sudden, as they reach the shallows, a hint of a white-break starts to show at high-points, and then suddenly there is a thunder-crash as the white crest streaks the gamut of the wave within a few seconds. It is something to see.

Those of the party that still had to work for a living and could only close their businesses at 13:00, arrived in mid-afternoon and the braai wood and beer started being unpacked. 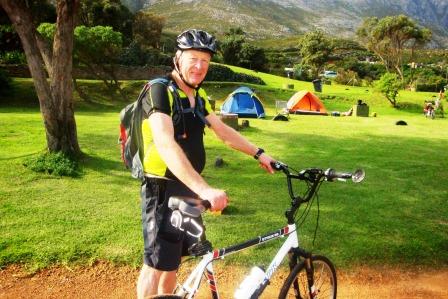 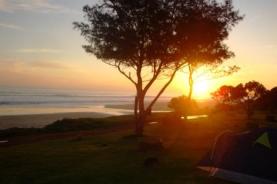 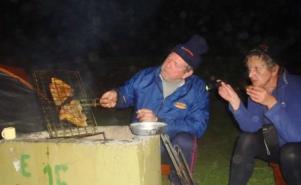 It soon got pretty dark and tiny LED camp lights could be seen flitting all around. For a while there was neither Sun nor Moon but an hour after sunset the full moon broached the mountain and we no longer had any excuse for tripping over guy wires. This was fortunate because with my lousy sleeping habits, I was up twice in the night making coffee in the freezing air. The moon was splendid though and I was prompted to pen this little Haiku. *

*(A Haiku is a strictly defined Japanese poetry form in three lines and captures a single moment in time. The form is 5 syllables in the first and third lines and 7 in the middle line. The first line sets the scene, the second tells you more about it and the third reveals the effect the moment had on the writer. The third line is often used to surprise the reader.)

This is a menu button.

for HOME and the Main Menu button for this blog.