We saw that when recording analogue sound on tape, head to tape speed was critical. Some musical notes sound higher pitched to us because their wave patterns have higher frequencies and shorter wavelengths. If the wavelength becomes so short that it starts to approach the length of the gap between the recording head poles, the waves are cancelled out as they pass the head. We can increase the maximum recordable frequency by reducing the width of the head gap or by speeding the tape up so the magnetic flux is spread over a longer section of the tape.

But head gaps can only be made so small and tape speed cannot be increased 300 times to make it possible to record the 5 million cycles per second (5MHz) that video requires as opposed to the 15 000 Hz that good quality audio requires. To record analogue broadcast video on a tape moving across a fixed head, the tape would need to run at about 140km/hr. Giant reels of tape would have to be managed and the whole thing would be highly impractical. So how do they record analogue video then?

Simple really. The tape does move, as before, at about 38 cm/sec but the head is not fixed. 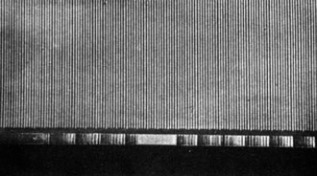 The head is a tiny construction on the rim of a lightweight wheel and spins at a very high speed across the width of the tape. i.e. If we dip the recorded tape into alcohol containing very fine iron filings in suspension, and then dry it out, the recorded track appears as a series of stripes running almost transversally across the moving tape. Professional recording tapes were 2″  (about 5 cm) wide, and were sucked into a curved guide by a vacuum pump whilst they moved past the spinning recording head. Looking at the tape guide side-on, it looked something like this. This curving of the moving tape enabled the head-wheel to spin in an arc making contact with the tape throughout .

The spinning head would start touching the tape at the top and lay down a track till it reached the bottom (Not strictly true but it works for now). You will see that there are 4 heads on the spinning wheel and each one would record a quarter of a complete TV picture onto the stripe on the tape. By the time the next head reaches the tape, the tape itself will have moved on a bit and the second head then records its stripe.After a full circle of the wheel, there would be four parallel recorded stripes across the tape containing the information for one whole TV picture. This ingenious approach produced a head to tape speed fast enough to record the 5 MHz waveshape which described the frequency modulated, broadcast standard,  video signal.This was known as a quadruplex system. There were other systems such as helical alpha-wrap etc but let’s deal with one at a time. They are all variations on the same principal.

During playback, the tape was synchronised by pulses recorded along the bottom edge so that the heads would find the recorded patterns and be able to track them and read the magnetic record on the tape. There was a lot of circuitry involved and the process required extensive mechanical and electronic stabilising, but it was done and high quality video pictures were recorded and recovered.