If this were Zen I would ask the question, If bagpipes are played in a concrete room with nobody there to hear them, are they played?

Most people know that the bagpipes are a very loud instrument and any piper who lives in a built-up area has the problem of finding a place to practice that will not disturb the neighbours. I live in an apartment block and practicing the pipes inside the building is definitely a no-no. My cat would report me anyway. But luckily for me, there is a concrete room on the basement level of our block with no connection to the main buildings.  The painters and maintenance men use as it a common room for their lockers, lunches etc.  It can best be described as a bomb shelter or concrete bunker and when the maintenance staff knock-off work at 5 PM, nobody uses it. I have fast-talked my way into getting a set of keys for this room and that is where I will practice making my pipes produce music.

Here we are going down the driveway from the road to the under-building parking. Note the Red picket gate on left hand side away from building.

We have turned left off the driveway and are now facing the gate we saw in the previous picture. Note that it is not under the building at all. 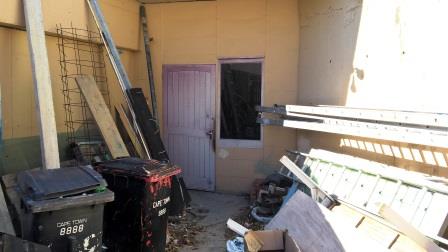 Behind the gate is a small yard full of junk and the door of the piping room can be seen at the far end from the gate.

As you can see it is a veritable concrete bunker.  I will run there when the bombs start falling.

I have started increasing the lengths of my squawks on the bagpipes. From an initial, cat terrifying, three second skirl, I have managed to sustain a single note on the chanter, without drones, for almost a minute continuously. With the chanter corked and the three drones opened, I have been able to get all three drones to sound for quite a long time. I am learning that the piper does not so much squeeze the bag under his arm but rather holds the bag steadily under the arm and allows the expansion of his chest to compress the bag. This way, the pipe bag becomes a sort of extra lung. When the piper breathes in, his chest expands and compresses the bag making it play. Then as be exhales into the bag, the bag inflates again and his chest deflates. The theory is simple. Actually doing it is another thing altogether.